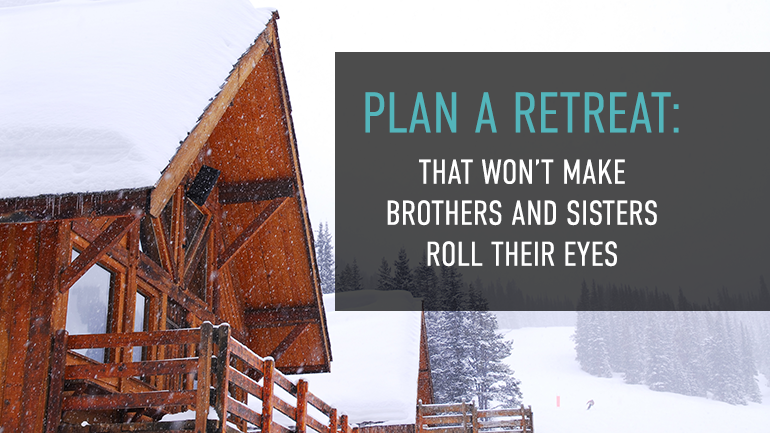 You’ve spent the whole day in the blistering sun doing the kiddie stuff, that is, balancing on logs and playing trust games with yarn, learning everyone’s feelings and roles in your chapter, and now you’re finally ready for the big girls and boys part of this retreat--the infamous ropes course. It’s a towering behemoth of splintering oak riveted together at angles whose safety you deeply question, strung with thick, roughly frayed ropes.

It’s taken down many a Greek member, and is as challenging as any special ops training. One slipped foothold with those tight-laced Timberlands, and you’ll hit every beam on the way to the fire ants and sand spurs below. But beating this course isn’t an option; it’s a mandate. You either conquer this, or you’ll never earn your name.

How many times did you roll your eyes so far? If the answer is less than twice, you must truly be a Jedi master. For one thing, a ropes course’s mildly fun and physically challenging nature is practically a cliché among Greek retreat ideas. By the time you get through the team-building kumbaya-isms, you’re so sunburned, parched, and tired that you just want to go back to the house and take a cold shower. Also, unless you’ve never been on one before, or are trying to triumph over a serious fear of heights, the ropes course can be a little underwhelming. You’re not training to become an actual Jedi. They don’t even let you take your plastic lightsaber up there.

So how do sorority and fraternity chapters plan retreats that don’t elicit sighs and giggles from their members? For one, think outside of the box. And don’t plan retreats where people say stuff like “think outside of the box.” You’ll create groans all around on that one. Therefore, to help you have an awesome and exciting time while members beef up on their wisdom and prowess, OmegaFi is here to tell you how to Plan a Retreat That Won’t Make Brothers and Sisters Roll Their Eyes.

This type of retreat is the kind where you work the rust off of those old “alumni relations.” You’re already in touch with them through OmegaFi’s sister company Pennington & Company.. But the alumni of your chapter have lives, and they’re not going to give up their weekends just to pass around the talking stick (unless they’re either super charitable and forgiving to your chapter or have no weekend plans to speak of). But chances are that your graduated sorority or fraternity members now have jobs and families, and you’d better have an awesome idea for the retreat you’re dragging them to. One perfect way is to offer up a relaxing trip. You don’t want to sit around a classroom or the local park just hashing out chapter business, as they’ve already done that for all the semesters they were active members. They’ve “paid their dues,” both figuratively and literally. Maybe you could, I don’t know, pay them back? Retreats are part business, of course, but here’s an idea: Go somewhere they can forget about the daily grind while your members get to business. That means if you live near the mountains, go to a ski lodge; you can all ski together (or learn to ski together on the slope not called “Devil’s Bend”), and when your sisters or brothers sit around to eat, drink cocoa and synergize, the alumnui can kick up their feet by the fire and have a little cognac.  And granted, not every chapter can afford a freaking ski retreat, but take this concept and run with it. Find some other fun, physical activity that’s challenging, like kayaking and camping, that will put your members in a mind frame to problem solve and grow, while your alumni guests can be put at a complete and total ease.

Don’t be “basic”--what we mean is, don’t plan a generic retreat for new members. You really want the newbies to “get” what your letters mean, what your chapter is all about, not just memorize a bunch of information to regurgitate  during the new member process. Are you the “nerdy” chapter, known for prowess in the sciences? Have a badass science fair with some laser tag! Both the learning and the fun portions can be made into team-building activities. Do your sisters or brothers spend a lot of time in their pajamas, love just hanging at the house and playing Mario Kart? Sleep over! But you may also want to dig deeper than that. What kinds of symbols in life represent your chapter? Is there anything on your organization’s crest, or in its history, a place of importance your members can visit, or a theme it evokes? Surrounding yourself with the brand of your letters’ history can certainly energize members and place them in the mood to connect and learn together.

Retreat #3: Sometimes Hokey Is Good for the Spirit

Team building is good, but you may also want to get into the spirituality of retreats--yoga as the sun sets over the lake, for instance. Guided meditation is another good one. These are quiet activities, and they’re meant to revitalize you. Now, if you are doing yoga in sweat pants in your own chapter house, that may be a bit of a cop out. Then again, it may actually be what the members want--no fuss, no travel costs, and some nice, relaxing activities among all the hustle and bustle of their hectic college lives. It’s important to gauge the personalities in the chapter. However, it’s also nice to get away to a relaxing spa or retreat, like out in the woods somewhere, and recharge your minds and bodies. It can be a bit hokey to some, but still, once they realize how stressed they’ve been over finals coming up and feel that stress melt away from their chakras, they won’t be able to thank you enough for dragging them along. Like we said, sometimes hokey is good for the spirit, if done right.

These are just some retreat ideas that may get you fewer eye rolls from brothers and sisters. But maybe you’re still rolling those peepers hard, so what’s your suggestion for a great retreat? Let us know in the comments below.