The Sorority Treasurer and Her President. Why Do They Work So Well Together? 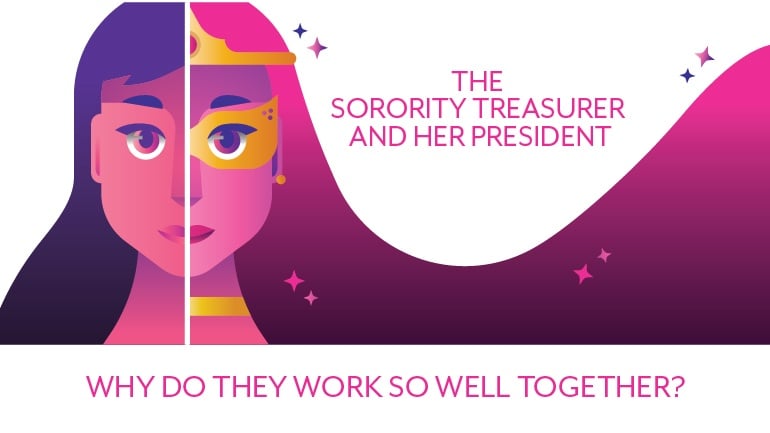 There hasn’t been a more dynamic duo since Brad and Angelina, Beyonce and Jay-Z, or--dare we say it?--Tina Fey and Amy Poehler. While every sorority officer plays her part in building a successful chapter, the treasurer and president work together like no others.

You might argue that there are plenty of other officers who complement one another. The house manager and risk management officer ensure sisters stay safe and thrive in the chapter house environment. The alumnae engagement and fundraising chairs need each other like Rose and Jack. (Never let go!)

You’re right--with one caveat. All due respect to these officers, but none could function without their treasurer and president working in perfect harmony.

Chapter management requires every gear in the sorority chapter machine to function, and that means two things have to happen: the treasurer has to grease the wheels with a well-managed budget, and the president has to act as the motor to drive her chapter forward.

Not only do other officers need the treasurer and president, but they need each other as well. A financially sound chapter is useless without a strong sorority manager. Without a fine-tuned budget, no amount of management will help right the sinking ship.

Though they’ve forged this relationship of necessity, The Sorority Treasurer and Her President Work Well Together only when they embrace the joys of sisterhood and each other. OmegaFi would like to celebrate these two young women and their crucial bond.

Responsibility, Accountability and Leadership in a Sorority

Most sorority chapters strictly enforce membership dues collection. Sisters who’re perpetually late on payments won’t be sisters for long. Still, every chapter faces sorority dues challenges. The treasurer sometimes struggles to collect early, full payments rather than relying on payment plans. She might have an easier time running a flea circus than convincing sisters to live in the chapter house.

Some sisters may see their treasurer not as an authority figure, but rather an accountant who’s always talking in numbers. They try to give her the benefit of the doubt, but they’re just not interested in chapter financial management. Even those words, chapter financial management, glaze over their eyes and slump them in their seats. The treasurer will jump and wave her arms with absolute giddiness when she talks about the budget at chapter meetings, but when she surveys the crowd . . . is that sister actually sleeping with her eyes open?

Alas, her budgeting joys are her own.

Though even if most sisters don’t exactly rejoice at the thought of calculators and ledgers, they should still demonstrate financial responsibility and awareness.

This boils down to leadership. While the treasurer can teach sisters about the state of the budget and how early, full payments and chapter house residency can help, she can’t lead the charge on her own.

Perhaps most importantly, a good sorority president can strengthen and encourage a sorority treasurer’s leadership abilities. Knowing the president has her back, the treasurer can act like the true executive she is.

She’s offered payment plans. She’s shared a list of chapter scholarships. She’s even explained how living in the sorority house is actually less expensive than living in a campus dorm or nearby apartments.

Sometimes the treasurer must confront a sister who won’t pay dues. This is hard for her. She’s not a disciplinarian. When she tries to act tough, the sister laughs her off. The treasurer feels lost. What can she do?

*Sorority president leaps in, hands on hips, cape billowing majestically in the breeze.*

Thankfully, the treasurer doesn’t have to enforce the rules on her own. If she did, she would feel pressured to make sure the chapter doesn’t have to write off sorority dues for a non-paying sister. She would spend so much time doing this that she couldn’t concentrate on the crucial tasks of creating and managing a budget.

The president helps enforce dues payments and oversees the process by which a non-paying sister might be removed from the chapter. She also can contribute to the financial committee that assists the treasurer.

The treasurer can’t thrive without the support net of her entire sisterhood beneath her, and the president helps weave this net.

Why Sorority Presidents Need Their Treasurers, Too

It may sound like we’re saying that every time the treasurer needs help, the president swoops in and saves her like she's a damsel in distress.

This couldn’t be further from the truth.

The president needs her treasurer, and not in a Batman-and-Robin kind of way. Forget those dorks. The president and treasurer are both Wonder Woman.

That’s right, both of them. Two invisible planes. Two lassos of truth. Continuity errors be damned.

A treasurer educates members about the budget and dues, hopefully reducing the number of sisters the president must reprimand, discipline, or remove from the chapter for not paying.

The treasurer manages the budget so that other executives and officers can focus on performing their tasks without having to constantly worry about the finances as well. She can answer financial questions and offer guidance to the president. She is an executive in every sense of the word, and contributes to meetings and chapter planning and functions as any other executive does.

Long story short: The sorority treasurer and her president need each other, and together they’re simply unbeatable. The end.

Sorority treasurers, what makes your president so special? Presidents, how can your heart hold so much undying love and admiration for your treasurer? Sing us their praises in the comments below!