What the Heck's a Campus Involvement Chair? 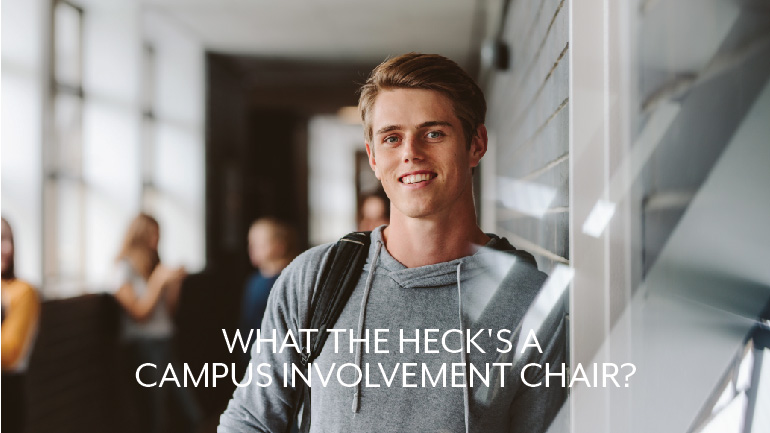 If you could define fraternity life in two words, they would be “campus involvement.”

In fact, many brothers would say they joined their fraternity chapters specifically to get more involved on campus.

Sure, you could join a chess club or something instead. You could hang around the student center and meet people. You could join student government. You might even become a resident assistant—if for some reason you’re into managing unruly freshmen and figuring out who almost burned the dorm down by putting a fork in the microwave.

Yet none of those options compares to how deeply involved in campus life you’ve become since joining your chapter.

But what exactly is campus involvement? You do happen to attend classes at your university. You’re on campus every day for some reason or other—especially if you live there.

You’re at every home game, tailgating with the best of them. Go team!

Well, it’s certainly a good start. But what fraternity chapters should excel at is taking involvement to a whole new level, building community from Greek Row to the ends of campus. This in turn can help grow your chapter come rush week.

If only there were a way to harness that energy for good . . .

Oh wait. There is! Chapters can enhance their efforts by electing a fraternity campus involvement chair. If you don’t have one, consider getting one. If you do have one, make sure you’re getting the most out of the position.

What the Heck’s a Campus Involvement Chair? You have questions. OmegaFi has answers.

How to Elect the Right Campus Involvement Chair

The first step is putting the right man in the position.

This takes a little more thought than it seems. You might think that the brother who has his hand in every club, committee and activity on campus would be great for this job. Think again.

If he’s so busy and overscheduled all the time, how is he supposed to help other brothers get more involved?

A brother who’s overcommitted and stretched so thin likely divides his time too much away from the chapter.

And that’s not the example of healthy engagement you want to set.

The best brother for the job will be someone who’s a member of some campus groups or organizations, but not so many that he can’t commit the time and resources necessary to be a chapter officer.

Elect a campus involvement chair who can focus not only on his own presence in the university culture, but on those of his fellow brothers as well.

It always helps to have a brother who knows his way around the major organizations on campus, one who may have served in student government or volunteered with campus rec to chaperone a summer camp for kids.

He’s still in a club or two, but nothing he can’t handle.

In other words: a good brother to chair this position has the experience and connections without being overly involved himself.

He’ll have good ideas about opportunities for brothers to join other organizations. He’ll be able to step back and manage his chapter into action.

How to Build a Plan for Campus Involvement

Once you’ve elected your campus involvement chair, you’re going to need an effective plan in place for him to get the most out of his station.

First strategize specific organizations in which to focus brother membership and involvement. Preferably, there should be one committee member assigned to each organization, or in a pinch one member could cover a few organizations.

Still, the chair shouldn’t spread things too thin. Choose organizations where brothers will get the most bang for their buck.

Remember they’re still students, so whatever time they spend with these organizations should offer engagement that emphasizes quality over quantity.

Set tasks for your position each week and throughout the semester overall. Be specific with these tasks, and keep records of your chapter’s progress when brothers join organizations.

Some specific tasks for the position of campus involvement chair might include:

Once the chairman has a solid structure to his office and the experience to execute his plan, you’re sure to see every brother more involved and engaged with the campus culture.

What Comes Next for Your Chapter’s Campus Involvement?

While most of the goals of this officer and his committee should be to ramp up involvement during the current semester, your chapter should always think to the future as well.

The chairman should keep good records, so he can accurately judge how well he did. Are more brothers involved in campus organizations now versus before he took office? What ideas really engaged brothers? What ideas hurt more than they helped?

By keeping an objective scoresheet, so to speak, of how the semester went, you can craft a stronger foundation for the next elected officer that takes over.

Take a step back and consider realistic timelines for certain goals.

How involved is your chapter currently? How much can you reasonably expect that to improve within a semester?

Differentiate goals that the current chair can accomplish from those that extend beyond a single semester.

For longer-term goals, carve a clear pathway for incoming officers to run with the baton.

Ultimately, you’d like every brother to join at least one other campus organization, or to be otherwise significantly involved in building campus culture. You’d like your entire chapter to participate in a campus project as well.

At the end of the day, a fraternity chapter cannot play a significant role in their university’s student culture without strong campus involvement.

Electing a campus involvement chair with experience, charisma, a solid plan and a forward-thinking agenda will take you a long way.

What approach does your chapter take to get brothers more involved on campus? Let us know in the comments below.