The Risks of Peer-to-Peer Payments For Fraternities and Sororities 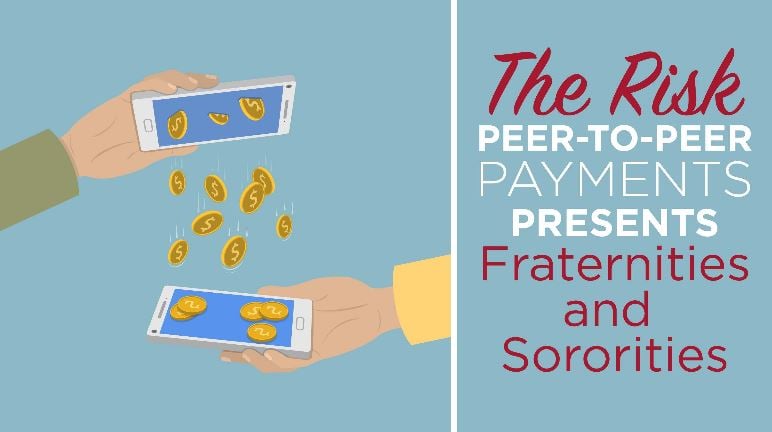 Editor’s Note: This article was originally published on August 23, 2017 and has been updated to reflect changes since that date.

Peer-to-peer (P2P) money transfer apps and services like Venmo, PayPal, Google Pay, Cash App and others are incredibly popular, convenient and cool. In fact, downloads of the top 10 P2P payment apps increased 12% year-over-year to a total of more than 235 million, a 32.3% increase since 2019.

And the cultural impact shows their wide-spread appeal. Viral tweets are often followed with someone’s Cash App ID, Venmo has effectively become a common-use verb, and there are numerous niche marketplaces on social media with millions of transactions done via PayPal every day.

However, in the world of fraternities and sororities, P2P apps present challenges and risks that should be approached very carefully or avoided all together at both the national and local levels.

P2P apps and their associated transactions are discoverable. Plaintiff’s attorneys have begun to develop expertise to conduct forensic investigations on Venmo transactions and obtaining Venmo records are becoming increasingly popular in divorce cases.

In addition, it wasn’t until last year that Venmo updated its app to limit the amount of publicly viewable transaction information. Even then, Venmo’s default app settings are for transactions to be public and not private.

Concerningly, Venmo’s public API remains vulnerable to just about anyone with the inclination and know-how to build tools that scrape the app for transaction data.

In years past, both fraternities and sororities were rumored to "pass the hat" at chapter meetings and events to collect cash to purchase items prohibited by inter/national policies.

Today, those same students are asking each other to Venmo funds to an officer's personal bank account. Were a chapter officer to then spend collected funds on alcohol or some other inappropriate item and were it to be discovered from the electronic trail of transfers through the P2P app into a student's bank account, the outcome would likely be devastating and costly.

Even if chapter officers are asking chapter members to pay for legitimate purchases via Venmo or Cash App, virtually all of these transactions occur "off-book."

The revenue from members is not usually recorded and categorized on income statements or 990 returns.

What's worse, the funds can easily disappear. Most students Venmo money into a chapter officer's personal bank account. If the officer is dishonest, those funds can vanish quickly.

If the chapter is using a chapter bank account instead of a personal account, there may be even more risk. How sure can we be the new treasurer changed the Venmo password on the account when she/he took office? Very likely, the new treasurer elected in November is inheriting a Venmo account that has been used by several previous treasurers. Chapters that provide someone else access to their account who then conduct transactions without their knowledge are responsible for the resulting use according to the Venmo User Agreement.

Lastly, most funds held in Venmo accounts aren’t FDIC-insured. Should the company go belly-up, most money sitting in accounts would be voided entirely. Now, it’s not likely that Venmo, or its parent company PayPal, will shutter their doors anytime soon, but that’s not the iceberg you should be looking at. Consider the exponential rise in cyberattacks, especially efforts from state-sponsored agencies and actors. If Venmo were to be hacked and user funds depleted en masse, Venmo isn’t responsible for recouping those losses.

It is a troublesome scenario that is ripe for fraud and loss.

If a chapter officer or advisor has not established a business account with Venmo and then accepts a payment via Venmo, there is little recourse if the student or parent making a payment needs to reverse or dispute the charge.

For example, Cole sends $10 to his chapter treasurer via a P2P app for a fraternity t-shirt. The chapter treasurer is not using a P2P account for business. That treasurer runs off with the money and never delivers the shirt to Cole. Cole has almost no recourse. Depending on the P2P app Cole used, Cole may not be able to dispute the charge or file a chargeback with his credit card company. A $10 issue may not seem important but imagine a similar scenario for Cole's rent at the chapter house.

The Venmo User Agreement is clear. Individuals paying and receiving funds via their personal Venmo account do not receive protection. Only qualifying payments to business profiles for goods and services qualify for what Venmo calls its Venmo Purchase Protection Program.

How many fraternity and sorority chapters have established business profiles? How many are willing to pay the fees associated with the business profile program? The consumer protections fundamental to paying with a traditional credit card or checking account do not exist when paying with Venmo to a non-business profile.

When a student uses his or her personal bank account to collect money from other members of the chapter, it creates revenue for that student exposing him or her to a tax liability. In fact, all P2P apps are now required to enforce newly passed legislation that requires them to issue users a 1099-K tax form if someone earns $600 or more annually in income for goods or services. A copy of that same form will be issued to the IRS. The IRS is going to consider those funds income to the student recipient and expect the student to pay the appropriate tax on the revenue.

Several years ago, a men's fraternity at an SEC school was placed on interim suspension by their national office for a significant disciplinary violation. The headquarters was cooperating with university officials and complying with the college's cease and desist order.

Instead of complying with the rules, a few rogue chapter officers instructed brothers to Venmo the next dues installment to the treasurer rather than pay through the traditional payment channels at OmegaFi.

While the headquarters thought the chapter was properly "ceasing and desisting," the chapter was circumventing the rules, collecting money and moving forward with the party they wanted to hold – despite the sanctions imposed by the university. Because it was occurring "off-book," the headquarters had no insight into what was taking place and faced a difficult situation once the university realized what was happening.

Reason #6 – Chapters are Potentially Violating the Terms of Service

P2P apps have created complex rules governing their operations. College students often do not read those terms and conditions when they sign up for the service. P2P apps can close accounts, hold funds and take legal action against individuals who violate their terms of use.

The business account option offered by Venmo comes with a fee structure. Always cost conscious, many fraternities and sorority officers choose to use the personal account structure instead of the business one to avoid paying the Venmo fees. By doing so, they may avoid fees, but they violate the app's legal agreements and bypass some of the consumer protections that exist under a business account.

For all of these reasons, fraternities and sororities should look to alternatives to P2P apps the way they currently exist. What alternatives exist?

Although popular and convenient for personal transactions, Venmo and other P2P payment applications expose fraternities and sororities and their members to tremendous and unnecessary risk. Inter/national headquarters staff should expand their educational programs and discourage the use of P2P apps for managing chapter finances.