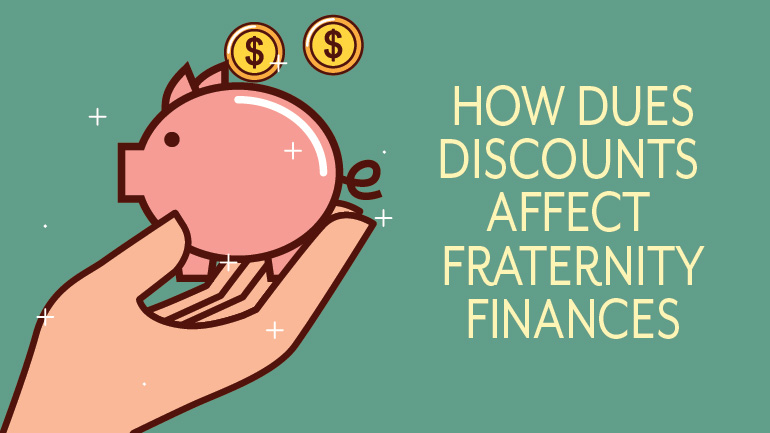 If you’re a fraternity chapter treasurer, you enjoy collecting brothers’ membership dues about as much as you’d enjoy, say, stepping into a river full of piranhas.

Or how about running a 5k barefoot over broken glass, or something involving honey and fire ants?

The point is, collecting timely dues payments has plagued treasurers for many a semester. What’s a fraternity man to do when his brothers hand him excuses instead of cash?

These tactics are fairly common. Chapters have been trying to find a way to collect membership dues for so long that the topic has been well covered.

Yet how often do you really sit down to think about the difference these tactics make on the budget? Sure, collecting some dues is always better than collecting none. But understanding how each option influences your coffers will help you be a better financial officer in the long run.

When managing fraternity finances, it’s important that you factor in dues discounts.

Let’s look at How Dues Discounts and other dues collection tactics can Affect Fraternity Finances.

When It Comes to Fraternity Finances, Are Dues Discounts Really Discounts?

Sort of. Not exactly. In a sense.

What we mean to say is, yes, they are discounts. But not in the way you’d typically think of them. Dues discounts incentivize brothers to pay early, but your budget must be able to bear it.

Set an early payment discount amount around where you think dues should be normally—not below that.

That way, when brothers pay up front and on time, they’re paying the typical dues amount. When they choose a payment plan, they’re paying more overall. And if they pay late, they’re penalized with additional late fees.

This may seem a bit unfair on first blush.

But remember, fraternity membership isn’t mandatory. Brothers sign up knowing well in advance what the costs will be.

If they can’t pay, they should discuss that with you before dues deadlines.

A brother has many options if there’s an unexpected reason he can’t pay, including payment plans, going inactive, or seeking a chapter scholarship, depending on how your chapter typically handles those situations.

A dues discount is not meant to help in emergency situations. It’s simply a tool to get more brothers to pay up front when they’re able.

If you make a payment plan slightly punitive, rather than setting the discount so low that it’ll harm your finances, you’ll get the best results out of that option.

And when you collect extra from payment plans or late payments? That’s extra in the bank for your chapter to use during the semester, or to place into savings.

It’s a win-win. Brothers get options, and the chapter’s finances benefit.

Don’t rely on them too heavily. And be wary of the downside of payment plans.

For one, it’s difficult for a treasurer and other officers to plan ahead when they constantly have to consider payments coming later in the semester.

It’s also not certain that brothers on payment plans won’t still pay late or not at all.

Some brothers may look at a payment plan the way some people do when they load up a new credit card. The “I’ll pay it later” mentality doesn’t work unless those brothers are financially responsible in the first place.

If practically every brother is on a payment plan, and they’re missing payments regularly, take a step back. Something’s gone terribly awry with your fraternity’s finances.

Devise strategies to keep brothers who can pay in full, in advance or early, doing so.

Your treasurer should also inform brothers of their necessary dues payments well in advance of the date you need them, with periodic reminders leading up to the deadline.

A dues payment plan should always be “plan b” in the eyes of the chapter, treasurer and brothers who owe.

It’s Not a Bribe. It’s an Incentive!

If you only rely on giving brothers swag to get them to pay membership dues, then yes, it’s a bribe.

Incentives aren’t a dues cure-all. However, when you sprinkle them in just the right amounts, they can be an effective motivator.

Offer the best perks to brothers who go above and beyond and pay dues early—meaning before the deadline, not at 11:59 on the day payments are due.

Also, make sure the chapter is still saving money when you consider what incentives to use. You don’t have to go buy a Rolex every time a brother pays up.

Offer things related to chapter life that you already offer, but which are in high demand among brothers.

Some fraternity dues incentive ideas include:

Tailor these incentives around what motivates brothers in your chapter, and build them into your fraternity’s finances. Then watch the dues roll in.

The best dues incentive will always be to educate brothers and keep them informed about their responsibilities to the chapter budget.

The treasurer can use chapter finance presentations, weekly budget updates and personal communication about amounts owed to the chapter.

He can also utilize fraternity financial software, such as OmegaFi’s Vault, which allows brothers to easily pay dues online.

No more “I forgot my wallet” excuses.

You can also use software to share detailed access to the budget and be more transparent about the experience dues provide.

More responsible and informed brothers are the best financial management tool a chapter has.

What other ways do discounts, payment plans and other incentives affect your fraternity’s finances? Drop us a line in the comments below.