For Fraternity Presidents, This Software Is King 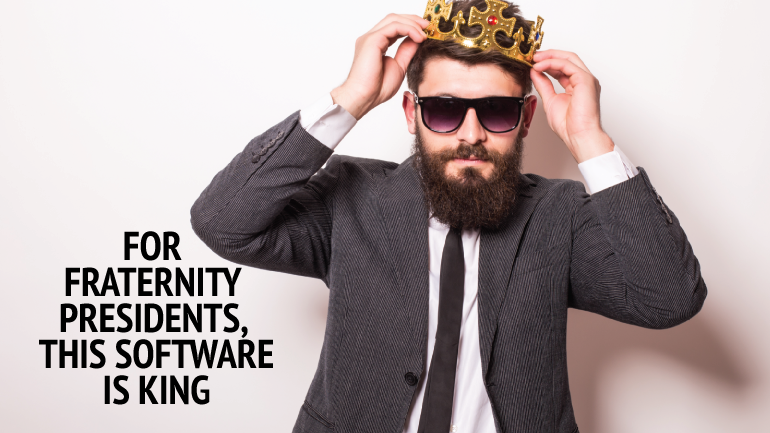 The use of software by fraternity chapters is pretty much a given in the modern age of Greek life on college campuses. It isn’t that a fraternity can’t exist without some kind of software to enhance their daily chapter operations, but it’s difficult to truly thrive without engaging in the digital world that we find ourselves in today. That’s true of many facets of society in general, and it’s difficult to get away from.

After all, fraternities are considered social organizations, and we live in a world where social media networks like Facebook rule the world. Your chapter’s digital presence is a huge part of its presence in general, and exposure on the screen is important to many parts of fraternity life, such as recruitment, campus involvement, fraternity communication and so on.

But how exactly does software factor in to the daily life of a fraternity chapter president?

There certainly isn’t a one-size-fits-all piece of fraternity software out there that simplifies a fraternity president’s job, considering that your chapter’s president has a set of duties which seem to change every time a new situation arises. One minute he’s helping interview potential new members with the recruitment chair, next minute he’s part of the finance committee helping draft a budget with the treasurer. He’s representing the chapter at national conventions, then he flies back and settles a dispute between brothers in the chapter house.

The fraternity president is what you would call a Jack of all trades, and software that helps him do his job is going to vary from task to task, with some software doing more of the heavy lifting than others. Except with all the blood, sweat and tears he puts into his chapter, he’s a higher card than a Jack. That’s why we here at OmegaFi would like to explain why For Fraternity Presidents, This Software Is King.

Communication is a key part of any fraternity’s operations, and without it the chapter would fall apart. Acting as members of a cohesive unit who are all on the same page is at the center of everything a fraternity chapter does. And since the fraternity president holds the top managerial position for his chapter, it makes sense that software for fraternity communication would be an integral part of how he performs his job.

How a fraternity president communicates with his chapter, and how he facilitates communication among brothers, will be different depending on the task at hand.

For instance, a president may want to create a baseline of communication between all brothers, regarding everything from dates and times of intramural flag football games to shooting back and forth documents and images for official chapter business. For this, OmegaOne is a piece of fraternity software that can centralize all general chapter conversations. You can ask questions, take polls, share locations for meetups, check in for an emergency or even track attendance to events or study hours. It really is the all-in-one software when it comes to communication between a president and his chapter.

For a more formal type of communication, consider using Slack, designed for a more businesslike style of communication. This is a great place to start with chapter projects or executive meetings that require a lot of planning. Here you can designate task-specific chat groups, share documents, images and videos, and set up conference calls. You can also include people outside the chapter when necessary, such as national advisors, alumni and members of your Greek life office.

Fraternity management is really the main chunk of the chapter president’s job description. Sure, you get to yell at people to pay their membership dues. And you probably get a bigger room in the chapter house, a special parking space or other perks. But primarily you’re overseeing the chapter’s baseline operations in the most boring, bureaucratic sense possible.

No, seriously. Didn’t anyone tell you that being a big-shot CEO is like 90 percent paper work? The Wolf of Wall Street may have been based on true events, and Mad Men may look pretty glamorous, but let’s be honest--that’s not going to be you, and we’re here to bring you back down to that reality.

When managing finances, your treasurer should look into using OmegaFi’s Vault to help set and manage your chapter’s budget and membership dues payments. Vault doesn’t only help the treasurer. It also is a great way for the president to oversee the financial reality of the chapter, giving a bird’s eye view of where the chapter stands and helping the president assist the treasurer as needed. It’s also a way to maintain an active database of brothers and help with general chapter management tasks.

Software can also facilitate the challenging task of managing a fraternity election. As a fraternity president, you will face the challenge of running an effective election that doesn't devolve into some kind of Outsiders-style, all-out brawl. While many fraternity chapters may opt to have paper ballots and count them manually, software can help streamline the voting process. There is software designed specifically to count and manage electronic ballots for small group elections. One such piece of software is Election Runner.

Election Runner can handle up to 300 voters and depending on the size of your chapter will range in price from free to around $30. The program is encrypted and secure, mobile friendly, and allows you to actively monitor the results of the voting process. Picking the next fraternity treasurer (and inevitably crushing the dreams of a few other would-be treasurers) has never been easier.

Fraternity presidents may seem like royalty, but unlike some snobby monarch with a gold crown up in his castle, presidents actually put in the hard work and elbow grease it takes to keep a fraternity chapter running smoothly. Software is a way to make the job easier and more efficient, and to make the chapter more interconnected.

Hear ye, hear ye, fraternity presidents. Let’s hear how software has helped in your regal duties. Write us a decree in the comments below.