What Should Be a Sorority President's Legacy? 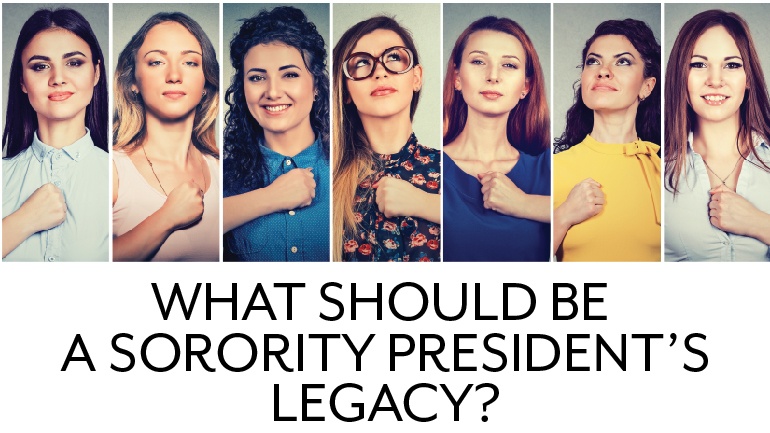 Sorority presidents have it hard.

However, the fact of the matter is that the tee-shirt chair performs her role, which we very seriously think is a crucial one, without the added pressure of having to consider her legacy or how she’ll be cemented into the history of the chapter for all of time. Being relatively invisible this way sucks because she probably doesn’t get enough credit, but on the other hand it allows her to fly under the radar, focus on her job and get in and get out without a hassle.

If you’re a sorority president, however, unfortunately that’s not going to fly. Sorry about your luck.

And yet, it’s not all bad news. While being a sorority president has many expectations and job-related stresses, it’s also one of the most rewarding experiences a sister can have. You get to learn firsthand what it means to manage a sorority chapter. You grow into a strong leader and role model to your sisters. Most importantly, you have the ability to change your own life for the better, becoming a stronger woman through adversity.

Whatever you do during your presidential term, you’re bound to leave a mark on both your chapter as a whole and the sister who has to fill your shoes when you step down. That’s why OmegaFi would like to help answer the question on every chapter leader’s mind: What Should Be a Sorority President’s Legacy?

“Our Sorority President Was a Good Listener”

When passing the baton to an incoming president, one of the key lessons you should teach her is to be a good listener. This doesn’t mean being a pushover and letting your sisters dictate what you do as a president. To the contrary.

Think about it. If you feel the need to become a megalomaniac and rule your chapter with an iron fist, talking over everyone else, some may believe that’s a sign of a strong leader. But it’s actually the opposite. It’s the sign of an insecure leader without any confident ideas. On the other hand, if your vision of the chapter and yourself as president are secure, there’s no reason you can’t indulge the ideas of others, to be adaptable when appropriate, to really hear what sisters have to say even if you don’t incorporate everything they say into your decision making.

Ultimately, the president’s decisions are based on chapter guidelines, expectations from nationals and the university and your own discretion. But a strong leader will always incorporate ideas from her sisters, and her legacy should be that she did not stand alone.

“Our Sorority President Ate, Slept and Breathed Her Role as a Leader”

We’re not saying to spend every waking moment dedicated to the chapter and issues of your fellow sisters, however important they may be. Even sorority presidents need to delegate and have some time to themselves to take a shower or finish reading that textbook chapter in Organic Chemistry.

What we mean is that in whatever task you’re doing, wherever you are, you should carry yourself as a leader. You should exude the qualities you want to see in your chapter. When you’re in the library studying, when you’re in public on campus, when you’re at an event in the quad or at the grocery store or whatever the case may be, you never know who you might impact in your daily life. When young women see the way you carry yourself when you wear your letters, you might be attracting new members to your chapter without even knowing it.

A legacy worth leaving behind will be that of a leader who worked on her role day in and day out. Sometimes that means making mistakes, admitting mistakes and growing from them. This will help you in your role managing your sorority chapter, but it will also help you in your classes and in your future career.

Your sisters will never forget a sorority president who never gave up on being a better leader.

“Our Sorority President Told Us the Truth, No Matter What”

While a sorority president will spend much of her time cementing her legacy with pet projects and making a name for her chapter on campus, honesty is as important as any of those things. What’s tough about telling the truth is that it isn’t always nice or easy. You may have to turn down certain ideas, you may have to lay down the law and discipline sisters who’ve broken the rules. If they do something really egregious or aren’t paying their dues, you may have to remove them from the chapter.

But at the end of the day, the truth matters. A good sorority president will always give her sisters a sober assessment of how things are, whether the chapter is on track or in trouble. She’ll keep it real about academics and study hours. She’ll thank sisters when they contribute and let them know they messed up when they fall short.

A sorority president should never lie to her sisters to make herself look or feel better. After all, as they say, the truth will set you free.

These are a few of the ideas we think should be part of a sorority president’s legacy. Being willing to listen to sisters, working at being a leader in every aspect of your life and being honest will take you a long way, and give future presidents something to guide them to greatness as well. What do you think makes a legendary sorority president? Regale us in the comments below!