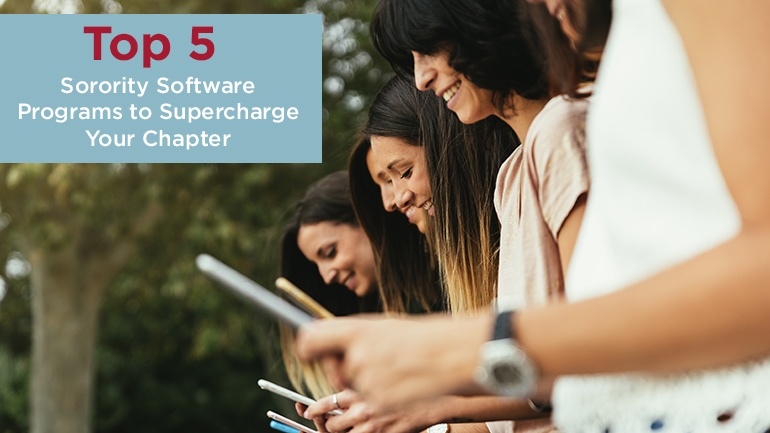 When it comes to being a leader, life can be stressful. When it comes to being a leader within a leading sorority, tasked with creating and executing the calendar of a chapter of a few hundred young women, life can be exhausting. It’s a challenge managing people your own age, especially so many, but the experience can be life changing for those who’ve been graced with the position. Being one of the leaders of your sorority can give you a bevy of intangible skills in public speaking, time management, event planning, management, and communication.

So how does one best steer the ship?

Answer: With a little help.

Today we live in a golden age of communication with the advent of the internet. Using our smartphones and apps, we can communicate on a level that was once unprecedented, and although social media can be a distraction more often than we’d like, social apps can be useful tools in getting organized, communicating with others, and getting things done.

For your inspiration, we here at OmegaFi are here to give you the Top 5 Sorority Software Programs to Supercharge Your Chapter and operate with top efficiency.

For those unaware of Groupme, the app is similar in function to a large private chat room. Remember those? For those born before 1995, this relic of the early days of the internet should ring a few bells. For those uninitiated in the days of AOL Instant Messenger (AIM), these chat rooms were usually filled with random people on a given topic. Groupme works similar to the old days of chat rooms, except this time, it’s just your sisters. Through the app you can communicate using simple text-based messages and upload pictures, as well as other word documents such as .doc and .excel files through Google drive links. However, although the app can be used both socially as well as professionally, we’d advise creating multiple Groupme channels (think of it as multiple text conversations) to keep the conversation light in one Groupme channel, and organized in another.

Perhaps one of the most important apps on this list, Companion is at the forefront of accountability and personal safety, particularly useful for sorority sisters walking home from a party or social gathering. The app is designed to monitor the movements and safety of those we love. Using the app, the user can input their destination (their house or a friend’s) and alert their sorority sister, friends, or family, that they have begun their journey. The app will then track their movements, notice any prolonged stoppages or alternative courses, and can alert authorities if anything unusual occurs or the user does not reach their destination within an appropriate time. For a young woman walking alone back to her dorm or sorority house, this is an invaluable resource for personal safety on a college campus, particularly when leaving a party.

Saving money can be hard, and that’s where the saving app Digit comes in. Although your chapter might have a method of collecting dues that is both bullet-proof and lucrative, when it comes to money there are few times when a little more isn’t welcome. Yet scrimping can also be challenging. Sure, you can cut costs here or there, maybe reduce the cost of an event by lessening the cost of food, et cetera, but often the moment we recognize we’ve saved a little extra, we feel compelled to spend even more. How many times have you found a $10 or $20 bill in an old pair of pants or jacket? Only to spend it immediately and bring balance to the universe. For virtually 99.9% of all humans, this happens just about every time.

Thankfully, Digit is a personal savings app that can also be used for a chapter’s treasury. The software is tied to a bank account, and will periodically siphon small amounts through a continuous series of micro-transactions in a virtual bank account. These amounts can be as small as a few dollars per week, or hundreds to thousands of dollars each month. The best aspect of this app is that it all happens independent of you. Yes, the app does allow monitoring of your virtual bank account, but since the transactions are done automatically, so it’s possible to literally set-it and forget it. For use outside of a personal level, this app can be tied to a chapter’s treasury and by the end of the year can give you a nice stipend of emergency funds for your next big event or social.

Maybe the most ubiquitous app on this list, Evernote is an app created to be the epitome of time management and personal and professional organization. The app runs the full gamut of tools to stay organized rivaling even the products of Google. Evernote allows the user to do everything from creating a project to-do list, taking notes, setting reminders, to snapping pictures of notes within the app. One of the most convenient aspects of Evernote is the fact that once uploaded, your content is available across any platform that can access the Internet (your laptop, computer, phone, et cetera) as the app’s main storage element is its web-hosted site domain. This level of access can only be considered remarkable. Imagine you’re hosting an event and you have to give a speech. You don’t have the speech completely memorized because you have your notes stored on the Evernote app of your phone, but oh no, your phone just died and there’s no wifi, so laptops and computers are out. What do you do? Using Evernote, you can download the app on one of your sister’s phones, login to your account (or the chapter’s) and boom; you’ve restored access to your information.

Capping off this list as the last entry, we have the Todoist app. When it comes to getting through your day, how do you measure success? For most people it’s an accumulation of the things they were able to accomplish. Although a little bit of free time is fun, we’ve all experienced the days where we’ve done nothing but sit around and binge watch House of Cards on Netflix. Despite the fact we’ve gotten nothing meaningful done, we tend to look back on these days when recounting what we’ve done as an accomplishment in and of itself.

“What’d you get into this weekend?”

“Nothing serious, just took the day to get through season 2 of Black Mirror.”

At its essence, time management comes through creating a list of items that need to be completed, prioritizing them, and executing them. The first step to that process however is simply making the list, and that’s exactly where Todoist comes in. As an app that primarily functions as an expanded digital to-do list, Todoist comes with a high degree of functionality allowing reminders, setting times and deadlines, and the ability to organize each entry into a category such as Errands, Chapter Work, and Schoolwork.

Although technology can be a tremendous tool to getting organized and boosting efficiency, it nevertheless takes a degree of focus and dedication to using them correctly. If you’ve got any apps that you use for your sorority that you think should be added to the list, let us know in the comments below!