Top 5 New Fraternity Officer Mistakes and How to Prevent Them 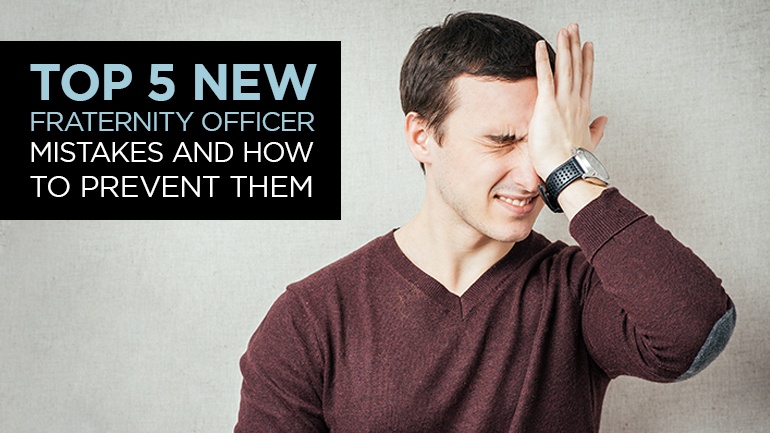 Let’s start by saying this: everybody makes mistakes, particularly the successful. The act of taking a risk itself is synonymous with both success and failure. For a new fraternity officer of a chapter, this rule is no different. To assume the role and responsibility of becoming a chapter officer is a risk in and of itself. So in this sense, mistakes are inevitable as you learn to navigate your new position and learn to manage the time constraints of extracurricular responsibilities. Regardless of preparation and witnessed experience, you haven’t done the job before, and sometimes the best (and quickest) way to learn things is the hard way. Although this can be a difficult lesson to learn, luckily for you dear reader, we’re here to put our helping hands onto your timid little inexperienced shoulders and guide you around the failure landmines to the glory of success.

For your benefit, OmegaFi is here to give you the Top 5 New Fraternity Officer Mistakes and How to Prevent Them. Let’s dive in.

This is an entry that cannot be repeated enough: delegate, delegate, delegate. Often times when assuming the role of a new fraternity officer, there’s a tendency to want to control every aspect of your position’s responsibilities. This sense of control will typically manifest in the Atlas-inspired habit of “putting everything on your shoulders.” We’ve all seen this story before in our lives whether we recognized it or not. In most companies there exists the 80/20 rule, which is defined as 20% of staff doing 80% of the work. Although feeling like He-Man at the end of the day can be gratifying, it’s not sustainable. If you’re the social events chair, for instance, there’s a good chance you have a committee in which to delegate. If you aren’t fortunate enough to have a committee, solicit volunteers and give them the small tasks that anyone could do. Keep the big, important stuff for yourself and you’ll still get the glory without the headache of every little errand.

4. Not Setting Expectations at the Outset

Let’s pretend for a second that you are a new fraternity president or treasurer. You’ve come into the chapter leadership with a plan in mind, a concrete platform for your administration that you need to not only communicate effectively, but inspire your members to come to action and support. This can be a challenge, but nine times out of ten, the issues that come with leadership tend to boil down to simple communication. If you’re a new treasurer and you’re looking to change the way  dues have been collected—maybe the last administration was lax on dues collection and now you’re facing a deficit—these expectations need to be laid out at the outset. Further still, setting and clarifying expectations isn’t for general members alone. Expectations are perhaps most necessary for your executive board as a whole. Regardless of your position, whether you’re the president of your organization or a committee member, understand and master the responsibilities of your role, your plans for what you plan to accomplish in it, and communicate those to your peers. The most important part is to hold yourself accountable to the expectations you set. If you promise to be efficient in addressing certain problems and expect the same from your brothers, you’ve got to be the first to uphold your end of the bargain.

3. Not Enforcing the Rules

This is a rule that’s usually going to apply to upper executive board members, but it’s important to life in general: Set the rules and enforce them. In essence, all this means is to set clear boundaries (both professional and personal) and maintain them. For example, if you’re having an executive board meeting,  the aforementioned rule has been to put your smartphones down for the duration of the meeting, and a new member begins texting on their phone, you’ve got to enforce the rules right then and there. If you noticed, this goes hand in hand with setting expectations, and enforcing these expectations is just the follow-through. Although your brothers are not trying to be purposefully antagonistic (presumably that is), it’s good practice in the working world and in your personal life to effectively communicate your issues when a line has been crossed. In an organization, particularly in a position of leadership, respect is paramount and comes two-fold: first from handling your responsibilities competently, and second, from holding yourself and those around you to a certain standard of mutual respect. When enforcing whatever rules you have set (chapter bylaws, etc.), you don’t have to be a jerk about it, but you do have to be firm. If expectations have been properly set, communicating these breaches should be nothing short of professional and impersonal.

2. Trying to Be Everyone’s Friend

The new fraternity officer that tries to be everyone’s buddy is setting themselves up to be a real-life version of Michael Scott (see: The Office). Being relentlessly nice regardless of how others treat you is a recipe for getting walked all over. This isn’t to say that relationships aren’t important, they are, but friendships can’t be gifted. They’ve got to be developed and earned. Imagine for a moment that your organization just voted in a new treasurer that’s a popular and friendly guy. He’s competent, pragmatic, but simultaneously attention-seeking and insecure. In a role as crucial as the chapter’s treasurer, he’s got a great plan for expanding the chapter’s budget and creating a huge surplus, but the first thing he’s got to do is collect dues. Being friends with every brother (or at least trying to be), he approaches every outstanding brother with a casual air, he’s accommodating beyond reason, and unfortunately, easily taken advantage of. A year later the chapter is in a deficit. Hypothetical aside, mixing personal relationships with business will nearly always create inefficiency. If you want to build friendships, go to happy hour and do it off the clock. Keep your officer position professional.

1. Ignoring Your Own Life

As the number one item on this list, it goes without saying that it’s the most important: Make time for your own life. If you have a girlfriend, a wife, make time for them. Make time for yourself. Your position is important to your development and to the development of your chapter, but at the end of the day it’s nothing more than an extracurricular activity. Allot time to study and give yourself at least an hour a day (including weekends) to be in the library whether you have work or not. A little bit of time to just sit in a quiet space by yourself can be incredibly therapeutic—in fact it’s the basis of spiritual meditation.

When it comes to making mistakes during our undergrad days, we here at OmegaFi can personally attest to blundering through each of these at least twice. If you’re a new fraternity officer or have been one in the past, share your own horror stories and the mistakes you’ve made in the comments below.