Toga Party? Too Old School. Try These Sci-Fi Social Themes That Are Out of This World 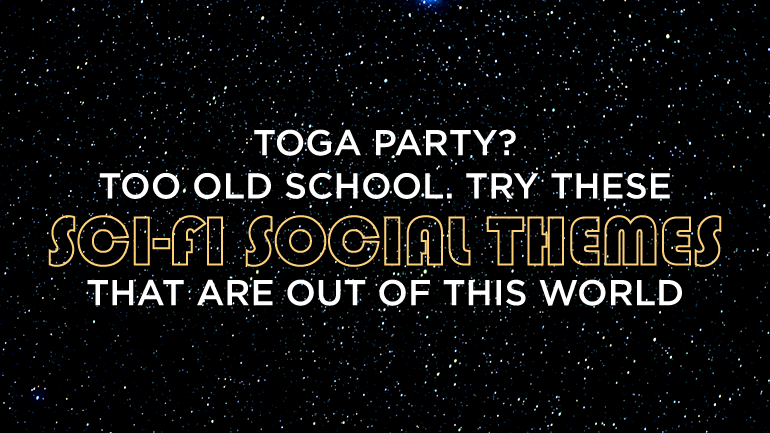 You show up in your toga and head laurel you picked up from the costume shop. You were saving it for Halloween, but, What the heck, you think, let’s go for it! It’s a classic motif. They do it in all the movies. Plus a toga is so . . . so . . . breathable. You can really settle in and get comfortable, and before you know it you’re having a good time like only the Greeks can. But . . .

Who’s that green space alien with the cardboard UFO taped around her waist? What’s with the glow-in-the-dark squirt “Ray” guns? And who’s blasting that old 50’s sci-fi campy sound effect--that high-pitched eerie sounding instrument the Beach Boys used in their music, what was it called--the Theremin? Why are there so many robots? Everywhere, robots!

Come on, kids. Get with the future. Toga parties have their time and place, but tonight we’re blasting off to a new destination. After all, it’s all about what comes next, isn’t it? For tonight’s events, perhaps the toga party is a bit too old school. Instead, OmegaFi would like to suggest you Try These Sci-Fi Social Themes That Are out of This World.

First Rule of Sci-Fi Socials: Carry a Big Ray Gun, or Two, or Three (Depending on Number of Arms)

If you’re holding your social at the house, there are plenty of fun activities you can have with those multi-colored sci-fi squirt guns that come like twenty for a buck at the store. You can play manhunt, capture the flag, or just make up your own game. Just make sure not to get overzealous with that Super Soaker and ruin the furniture. There’s always that one person. You know who you are. A more expensive alternative might be laser tag, either a set purchased for private use or just hit up a laser tag place as part of the social activities for the day. Make sure you’re well “armed.” As in, if you’re into having the extra green rubber alien arm duct-taped to you, go for it. You can take it a step further and get the toy ray guns that light up and make futuristic noises, as well as other science fiction related toys and gadgets, and hand them out as party favors. Just make sure the ray guns are obviously toys, no black or metallic colors or realistic shapes. This is all for fun and the love of the sci-fi social.

Avoid this day at all costs. So you’ve all dressed up as silver-painted robots in tubes and boxes, green Martian face paint with little antennae bouncing around, and you’re drinking strange-colored outer-space drinks, but it just feels . . . corny. Well, of course it is. But it’s too corny, and that’s because you didn’t set the mood correctly. You need to bring it all together. That means really thinking on an overall motif or theme. If you know someone who’s really good at scrapbooking, or collaging, or just generally UNDERSTANDS themes, that’s your party planner. You want a goofy Jetsons party? Something more modern, like Futurama? Something more campy and Cold War-ish? How about a horror theme that’s more Halloween-esque (you might even reserve this for a Halloween party)? Alien, anyone? Maybe even go by a specific decade of science fiction. Regardless, get organized and make it happen. Pick appropriate background music. It might be digital sounds like a synthesizer, or something a little spookier like Theremin music. Could old black and white sci-fi films be playing in the background? Are the decorations good to go? What about glow in the dark paint? Please remember to get the washable kind. Or how about those stars that glow in the dark to stick to the ceiling (or alternately a star projector), and a fog machine? The possibilities are endless. Pick and choose what works best with your overall theme or motif. Mixing and matching can work if done correctly, just make sure you think it through.

Although yours won’t be made of people--at least we hope and pray they aren’t--you can make some imitation Soylent Green cookies. But really any sci-fi themed snacks or drinks--space gummy worms, cupcakes with little Yoda faces, maybe some red food coloring to make Klingon blood wine, or for the squeamish, green apple martinis (green Kool-Aid if you’re going non-alcoholic). How about eclairs frosted to look like Chewbacca? If you have a design idea for food but can’t pull it off yourself, maybe talk to a food decorator. Or else check out a do-it-yourself guide like the Star Wars Cook Book: Wookie Cookies and Other Galactic Recipes. Don’t ask us how we know this exists. The point is, the sky’s the limit, quite literally.

The Ultimate Rule of Sci-Fi Socials: When in Doubt, Go Out and Explore the Galaxy

You want this sci-fi thing to happen, but you aren’t going to put it all together yourself. So go out. Rent space at a club or elsewhere and have a foam-slash-laser party with glow sticks and sci-fi themed outfits. If the location has a dress code that doesn’t allow costumes, wear that tie with the planets on it. Or what about that ridiculously reflective silver button down shirt you wouldn’t be caught dead wearing for any other occasion? Or maybe slip on that dress swirling with galaxies with the neon fishnets and the zany lipstick. Put your hair up in an interstellar bun, or whatever else comes to mind. Just remember the most important part: Have fun.

Life’s too short to live in the old days, so put that toga away for another time. Hop in your DeLorean and take your chapter back to the future (sorry, we had to) with a social theme that is out of this world. We hope in this case we’ve convinced you that as much as the old school can be fun, you really should give a few of these Sci-Fi Social Themes a try. Think of it as your own personal Revenge of the Nerds. Speaking of nerds, we’re pretty nerdy, but surely we can be out-nerded. What did we miss? What sci-fi themes would fit perfectly into your next social? Let us know what happened in Star Trek Season 1, Episode 22 in the comments below.