Manners in the Manor: A Quick Etiquette Guide for Living in a Fraternity House 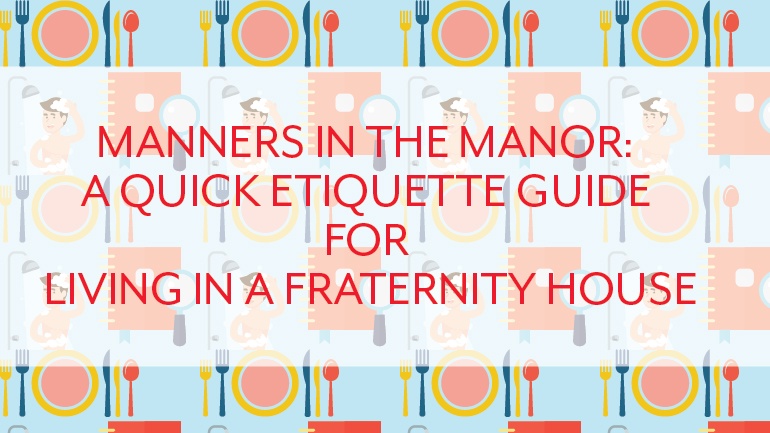 You’re all brothers from another mother. But there’s always that one brother who makes you wonder: Was this dude raised by wolves? Pigs? Cows? Or maybe [insert barnyard animal]? Because, based on the way this guy’s bad habits affect his housemates, he sure doesn’t seem . . . human.

It’s not that you don’t like him, per se. Sure, he’s the life of the party. He’s quick with a joke or to light up your smoke (sorry, we slipped into “Piano Man” there for a second; force of habit). The point is that you don’t hate him or anything. The fraternity house wouldn’t be the same without him. You just hate living with him with your very being and wish there were a way to escape the tidal pull of his rancid stench.

This guy doesn’t shower, first off.

“In the wild, you don’t need to shower,” he tells you.

You don’t really know what the heck he’s talking about, and meanwhile he’s howling and scratching his fleas all over the common area couches. When the full moon comes out you find his bloody, ripped clothing and dog hair all over the place, and him passed out naked in the middle of the floor. And he never cuts his razor-sharp toenails.

What’s his deal? Why can’t he just show a shred of respect for the fact some of the brothers in the house have to actually wake up early and, you know, not just run around doing weird werewolf stuff at night?

Now let’s take a step back and look at this with a twist ending: What if the werewolf is you? Okay, maybe you aren’t a mythological monster, but you still might be a terrible housemate and not even know it. That’s why OmegaFi is here to guide you with the Manners in the Manor: A Quick Etiquette Guide for Living in a Fraternity House.

Rule #1: The Dessert Fork Goes to the Right of the Dinner Fork.

Technically, yes, it does, but we’re just kidding. Fraternity house etiquette isn’t about the formalities and the niceties. It’s all about the vibe, and for the most part this is an easy-going vibe. In other words, live and let live (except when it comes to official chapter business). There’s a certain sacred feng shui in a fraternity house, and for that reason the real first rule is don’t disturb your housemates’ chill.

You’ll usually know pretty quickly if you break this rule. If when your roommate is studying, you’re always blasting rap in the next bunk over, chances are you’ll eventually find your stereo thrown out a window. If the brothers are tripping over your gym bag full of dirty socks, tighty-whities and free weights to get to the foosball table, you’re likely going to be spotting yourself from now on. When it comes to brothers and their chill--meaning, in short, their ability to go about their day in the house undisturbed--mutual respect is key. While living in close quarters doesn’t really allow for brothers to live with zero interruptions, the more you compromise with them, the more they’ll compromise with you. Then you’ll be chilling, too.

In some respects this list is a bit superfluous. Why? Because you already have a rule book for living in your fraternity house, and you should read and follow it to the letter. What this boils down to is knowing the university regulations and state laws on things like safety and anti-hazing rules, as well as alcohol consumption and other rules. You should understand the financial obligations of living in the house and the fine print on things like your security deposit and meal plan requirements. Know when quiet hours and study hours are. Instead of blasting your brothers behind their backs if there’s an issue, understand there is likely an official channel to make a grievance through the house committee. Know when rent is due and pay it on time. While you’re at it, pay your dues. Keep your room clean, follow your assigned duties and don’t do stupid things like climb the roof or set off firecrackers indoors. (Do we really have to tell you this? Maybe we do if you’re that werewolf guy.) Follow all other rules of the house and harmony will be yours.

Rule #3: Take a Shower. Even if You’re the Werewolf Guy.

What we’re getting at here, Michael J. Fox, is that if you don’t want your fraternity house to become a hazmat zone, hygiene is required of all brothers living there. Imagine, if you will, tens of grown men who sweat all day, never bathe and live in an enclosed space together. If you aren’t bothered by this, congratulations--you’re the smelliest brother of them all.

It’s really as simple as being an adult. First of all this means keeping up with laundry, whether in the house laundry facility, a university laundry facility, the laundromat down the street or, sure, why not, your mom’s house. It also means bathing and grooming regularly and helping keep common areas clean of clutter, trash and half-eaten food. Why don’t you go the extra mile and spray some Lilac-scented Febreze? You’ll be glad you did when it’s your turn to bring home a date, and you don’t have to explain “what died in here.” You swept out that raccoon this morning.

So there it is, gents. Fraternity house etiquette may sound fancy at first glance, but really it’s just common decency and manners. So long as you compromise to make living in the house easier on each other, follow all the rules of the chapter house and hose yourself off once in a while, you should be living on easy street. We were trying to think of another “Piano Man” lyric to slip in here, but nothing seems to fit so well as just telling you to go throw your next social, circle round for some Joel singin’ and enjoy each other. You’ve earned it.

What rules of etiquette do you think are crucial to chapter-house bliss? What would you add to our list? Let us know in the comments below.