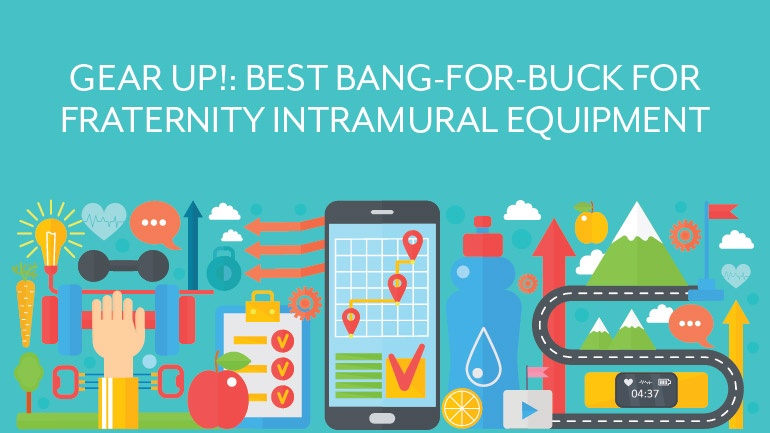 Fred has a busted knee swollen the size and coloration of a rotten grapefruit. He hobbles to 7am Organic Chemistry on crutches with the help of a few sympathetic sisters he got to know during Greek Week. When they pass the intramural fields, Fred has an unpleasant flashback of a flying soccer ball, his cleat-less shoe slipping on the dewy grass under the field’s towering lights, a slight miscalculation causing Ayush to barrel shin-first into Fred’s knee, an explosion of pain.

Ayush walked away from the impact with nothing more than a bruise on his shin and a smile on his lips. Of course he did. The guy is basically a freight truck. Who needs shin guards when your legs are thick as tires? Yet none of this would have happened if Fred’s fraternity chapter had invested in proper intramural equipment. Of course, said equipment can get expensive pretty quickly. Where does this fit into a budget that’s already as tight as Ebenezer Scrooge’s purse strings on Christmas Eve?

Let’s find out. We’ll follow Fred, our protagonist and chapter athletic chairman, as he’s guided by OmegaFi and the ghosts of sporting yet to come. So Gear Up! It’s time to talk Best Bang-for-Buck for Fraternity Intramural Equipment.

The Ghost of Free Stuff

But he doesn’t have to finish his sentence. Even Fred knows the end of that sentence. He’s aware of the intramurals budget, and how this semester the treasurer--who happens to be that jerk Ayush--simply can’t allot a penny more. Fred has no idea how he’s going to pay for all these registration fees, team jerseys, and equipment (like cleats, for instance, he thinks with a surge of pain through his knee). In this instance, the ghost is right: The best things are free.

But what’s free these days? For starters, one important aspect of playing intramural sports is preparation and gym time. Many college campuses offer free gym access to students, so encouraging brothers to use their downtime together at the gym helps them keep physically fit, as well as forge bonds with chapter workout buddies. An alternative might be running. You may need to pick up some running shoes to avoid injury, but chances are many brothers already have a pair of these.

Another strategy might be to run a poll--you can use technology such as GINSystem for this--to figure out which sports are most popular among brothers. These are the sports for which your fraternity brothers have likely already purchased equipment: baseball bats and gloves, masks, helmets, shin guards, cleats, lacrosse sticks or whatever the case may be. Next, get ready for a visit from…

The Ghost of Shoe-String Budgeting

For starters, Fred doesn’t have to go to the high-end sports emporium downtown (you know, the one where you can go camping INSIDE the store) to make fraternity intramurals a success this semester. He’s already checked and double-checked the budget with Ayush, and he knows what should be going into intramurals.

The problem is a few brothers haven’t been keeping up with their membership dues. So his first step should be to coordinate with other fraternity chairmen and make sure brothers who haven’t paid can’t participate in intramural sports or otherwise use the equipment purchased. If the chapter’s intramural teams are competitive and fun, this should be another great tactic to encourage brothers to pay their dues. If the teams are bottom feeders, well, we don’t know what to tell you. Sorry, champ.

Once Fred has that sorted out, he should do an inventory of what equipment the fraternity already owns and what it needs. Then he should begin to shop around, check for the best prices, buy used equipment where acceptable (of reputable brands/quality), possibly look for wholesale deals and place player safety over style and panache.

For instance, Fred knows his fraternity brothers want NCAA-quality, shiny uniforms for their flag football team, but they’ll just have to get over it. Sturdy gear is more important than looking like the Oregon Ducks. And if the fraternity must splurge on sick uniforms, he’ll save the sickest looking ones for the sport they excel in most and have the most participation.

The Ghost of Beggars must be Choosers

Finally, Fred, this ghost pleads: Don’t sign up for every single sport. Fred will have a hard time getting his brothers to participate fully in them all, with school and fraternal duties and work schedules, among other priorities, such as--ahem--romantic ones. The idea is to specialize. To choose. After the poll Fred conducted based on our earlier suggestions, he should have a good idea of who played what in high school, what gear they have access to, and how many brothers he’s likely to have interested in a given sport.

Fred might consider a few sports that are cost-heavy, such as baseball, and a few that cost practically nothing by comparison, like ultimate Frisbee, or Frisbee golf . . . basically anything involving Frisbees is what we’re getting at. Another choice Fred might make is what equipment the fraternity is willing to provide in addition to the admissions fees and uniforms, and what equipment it is reasonable to ask brothers to provide. This might go a little beyond what they already own, and especially if they want specialized or more expensive equipment than may be necessary for casual play. Casual? Fred thinks. We’re not casual. We’re hardcore! Okay, okay, Fred. Calm down. You’re hardcore: hardcore about getting the most out of your fraternity’s intramural budget, that is.

Now that you’ve witnessed Fred’s Dickensian journey of self-actualization, and seen how much the better he’s come out of it, it’s your turn to be visited by the ghosts. Alright, maybe you don’t have to be haunted and terrorized by spirits in the dead of night just to make smart decisions to get the most bang-for-buck for fraternity intramural equipment.

But it’s never too late to wise up, and learn to keep your eye on Ayush out there on the field. What would you add to this moral sporting tale? What tips have worked for your chapter’s intramural budgeting?

Take a seat by the hearth and regale us in the comments below.