Fraternity Officer Transitions Made Easy: 4 Steps to a Smooth Change in Power 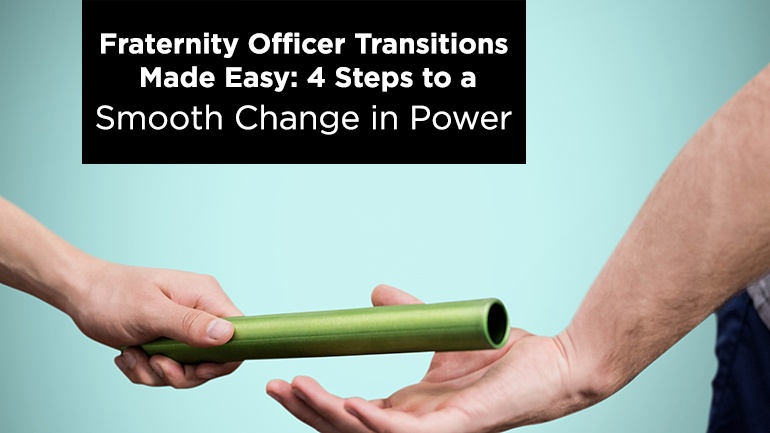 Fraternity Officer Transitions. This is an organizational topic that couldn’t be more apt. With (now) President Donald Trump taking office, the race has started in the process of transitioning the old guard into the new. As it stands, Donald Trump’s transitional process has been less than smooth with confirmation hearings being stalled and some appointees failing to be pre-vetted. Although few presidential cabinet transitions are as smooth as extra virgin olive oil—they’re supposed to be strenuous—this current transition has been less than stellar compared to historical contemporaries. Although the U.S. White House is objectively a little bigger than your fraternity’s chapter, fraternity officer transitions can be challenging as well. The new administration has its platform, it’s presumably distinct from the previous administration, and cross-communication and collaboration is limited. Unfortunately, however, this often means a steep learning curve and an initial series of preventable mistakes.

For your benefit, OmegaFi is here to simplify this process and create an environment where Fraternity Officer Transitions are Made Easy: 4 Steps to a Smooth Change in Power.

4. Create a Template for Your Role

Unless you’re a bitter jerk (we know you aren’t, but had to say it anyways), you want the next administration to hit the ground running and progress the chapter further. Like a parent, your previous administration has had its time in the sun, and now it’s time to prepare the next generation, the next administration, for success. So how do you do this? Simple. You create a template for your role. This doesn’t mean writing a list of the duties and responsibilities for your position, the incoming administration already knows this (they better). Instead, it means giving a detailed breakdown of what you’ve done and how you did it. It’s creating a guide for how to navigate your position. If your administration, through x number of events, increased the surplus funds within the chapter and won several national awards, do your chapter the service and write that stuff down. As history has shown, we can’t tell you how important it is to write things down for the next generations to come. There’s wisdom gained in any experience, so do your due diligence and pass that knowledge on for the betterment of your chapter and organization. Further still, this isn’t just a directive for the top position within the chapter—president—this is general rule applicable to any of your top positions from the executive board to the committee chairs. To aid in record keeping process, require your administration to create these positional guides two weeks before the transition is set to take place, save a copy of it to the chapter Google drive and to give a printed copy to their replacement.

3. Allow Your Replacement to Shadow You

Let’s assume that you and your replacement are on good terms. Let’s face it, you should be, or at the very least you should be cordial for the betterment of the chapter. If your chapter is structured as they should be, so that officer elections are set well in advance of officer transitions, and there’s time for the current administration to finish out the term, give your replacement the opportunity to shadow you directly. You guys are students, so timing and scheduling can be difficult to synchronize, but make an effort to include your replacement in decision making (invite them to sit-in at an executive board meeting) and general day-to-day activities. For example, if you’ve got a council meeting coming up, let the council know in advance that you’ll be bringing your president-elect to the meeting as well. Not only is this a smart and forward-thinking practice, but it also gives you the opportunity to make the proper introductions for your replacement. The added effect is that it’s also an act that reflects positively on your chapter. As was the case with creating a positional template, it’s wise to encourage all executive board members to create an opportunity for their counterparts to shadow them directly. This will ultimately make the transition process smoother, give your replacements a deeper grasp of knowledge on the position, and foster greater closeness and brotherhood.

Similar to shadowing but more direct, give the incoming administration an allotted time to sit down and learn the role and responsibilities of the position directly. This can be anywhere between several meetings before they take office to just a handful but this is a great opportunity for your officers to give an overview of their position while providing crucial resources such as budget templates, previous chapters’ minutes, and event breakdowns. The point of this process is to increase a sense of contact and information sharing between the current and upcoming administration. As an exiting administration, ultimately your final duties are simply to give as much information to the next administration as possible so that they have the choice to either learn from your mistakes or to ignore any advice and repeat them.

1. Give Your Replacement a Run-Down (Lessons Learned and Things to Expect)

In many organizations, there’s a process of review called a “Lemon-Squeeze.” This process follows the typical format: what did we do well, and what did we do poorly. The purpose is to squeeze the lemon as much as possible and break down and critique (positively and negatively) the reviewed subject. With this in mind, being honest with your incoming administration is incredibly important to their success. Give them insight on all your failures in your role and administration as well as your successes. Although it’s often difficult to admit failure, courage and maturity are the hallmarks of a person willing to accept the responsibility and consequences of their decisions. In the process of preparing the next administration for the hurdles they may face in throwing events, dealing and managing other brothers, or simply balancing their responsibilities with their school lives, give them all the wisdom you’ve gained. In a callback to preparing the next administration like a parent teaching their child how to ride a bike, set the training wheels up, teach them the basics, and when they’re ready, take the wheels off and watch them go.

Any personal stories or quick tips for aiding the fraternity officer transition process? Let us know in the comments below!