Do You Have a Good Fraternity Treasurer? 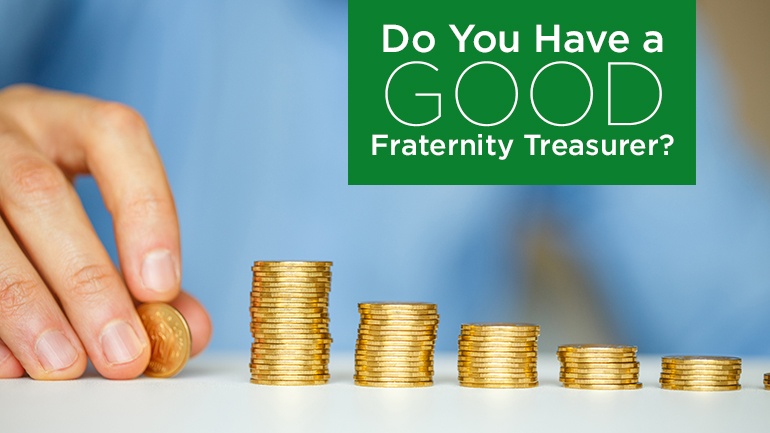 You may have never asked yourself if you have a good fraternity treasurer before. Maybe you figured: “Our brothers voted for various chairs and positions, and certainly that is a truly democratic way to find the right man for the job, right?” Sure, it’s the most democratic. It’s the fair and thus appropriate way to elect brothers to chapter positions and delineate chapter duties. You might’ve even stayed up late into the night in a marathon session deciding who will handle which responsibilities, despite many of you having, say, a Comp II class all the way across campus at 8 am.

Yet, you may find out down the road that the brother in charge of the treasury—an upstanding and intelligent person who cares deeply about your chapter—is simply not cut out for this particular station and its associated tasks. As the treasury is the financial lifeblood of the chapter, having a brother that’s a bad fit in charge of such a responsibility can be detrimental. Luckily, there are some glaring warning signs you can spot well before you end up with a lame duck treasurer. Likewise, there are other signs that a brother might be particularly suited for the job of chapter treasurer, as well as some tools that can make him even better at keeping the chapter financially fit. We here at OmegaFi want to make sure you will always be able to answer confidently when the question arises, Do You Have a Good Fraternity Treasurer? A good treasurer…

…has a history of paying dues on time.

What is a more important yardstick for understanding financial responsibility as it pertains to your chapter than a brother who actually pays his chapter dues? Further, this brother should be someone who against all reasonable odds works to keep from being delinquent on his payments. It may be a pretty simple concept, but no one who owes back dues should be allowed to serve as the chapter’s treasurer. Keep in mind, this brother will need to be a stalwart of staying on top of finances, not only as it pertains to budgeting, but also in ensuring other brothers pay their dues on time so that the budget functions properly. He needs to understand that in order for your chapter to be able to book that really nice venue for the formal, to keep up with housing costs, for the big philanthropy to be a success, dues must be paid. A brother with a proven track record of timely dues payments isn’t fool proof, but a pretty strong indication that he understands and respects the financial situation of the chapter in relation to the activities of its brothers. And in fact, a great treasurer will know how to utilize the tools at his disposal. He might consider some of the dues collection tips we’ve talked about in the past, or utilizing a dues collection process such as OmegaFi’s Vault.

Ideally all brothers in the chapter would already be organized or practice the skill as often as possible until it becomes second nature, since for one, a collegiate career is exponentially more difficult for the unorganized student. Second, a fraternity is—wait for it—an organization. It’s what you’re signing up for when you pledge to join. However, we all know that brother who lovingly makes us think of that classic film, Animal House. That is: he leaves a mess everywhere he goes, clothes are disheveled, sleeps until noon every day, has textbooks and papers scattered around his desk and bed, and you have no idea how the heck he even makes it to class on time, or ever.

A good treasurer will be the kind of brother, ideally, who has binders marked neatly with tabs for assignments, calendar reminders on his phone, and uses highlighters, or an organizational program such as Evernote to keep his life in order. He keeps a regiment and checks his email often. This is the brother who will treat your treasury ledger and how it affects all of you with the same diligence and respect. And, the ledger will reflect careful planning and your chapter will flourish as a result.

…is not super busy with school.

This seems maybe a little unfair upon first glance, but hear us out. We understand that all brothers are going to fit into this category of being “super busy with school” in one way or another, if they’re applying themselves properly to their degree programs. However, you are well aware that some brothers are taking twice as many classes as others, or in a particular semester are taking the “weed out” classes of their majors—the ones whose heavy workloads are designed to force them to decide if they love or hate their fields of study. They’re up all night pounding energy drinks and typing away. These may not be the right brothers for the treasurer position, and for those who fit this bill, you can always encourage them to run again in a less overwhelming semester. You need someone who, while putting school first, isn’t so inundated that the chapter finances suffer and delinquent dues go ignored or forgotten. A good fraternity treasurer will be able to find time to balance these things.

…is not a first year brother.

There are a few benefits here. First and foremost, a brother who’s already been involved with the chapter for a semester or two will be familiar with its working, will have seen past budgets and understands the direct correlation between his dues and the functions of the chapter as a whole. He’ll have spoken with past treasurers as well as other chairs and know what each needs to get the ball rolling with their financial needs. Second, and perhaps of no less importance, this brother will have seen in action how your fraternity chapter functions together. He may not be an accounting major, but so what? Neither was the last one. He’s seen the brothers work together to come up with a budget that works, and what he’s learned is this. If you don’t have the answers, ask for help. Collaboration is a vital skill a seasoned brother will bring to the treasury.

These are just a few of the ways to determine if you have a good fraternity treasurer. What have the best treasurers brought to the table in your experience? Let us know in the comments below.