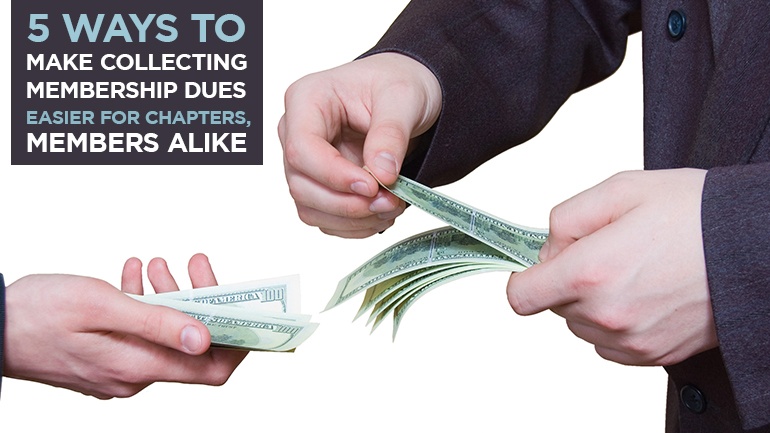 https://www.penningtonco.com/Every chapter has the issue of dues collection. Likely your chapter already has seen this problem crop up with your members. It may not be as easy as it should be for fraternities and sororities to collect membership dues. Compound that with delinquent brothers and sisters, and the last thing chapters need is for any additional factors to make dues collection more difficult than it already is, or to impede funds from going where they should.

An unorganized or mismanaged collection of membership dues will leave chapters reeling with extra problems that officers may simply feel unequipped to handle. This can create problems when members try to divide time and resources with the chapter and their education at their respective university degree program. Not only will dues slip through the cracks more easily, and make it harder on members to pay (thus giving them an excuse to delay or not pay), but with classroom learning as the main pursuit of every university student, a poor dues collection system will hinder that pursuit by taking members’ time and energy.

Thus, to make your life easier, make studying for exams and writing essays more central to your time, and generally streamline the influx of cash into your organization, we here at OmegaFi would like to present you with 5 Ways to Make Collecting Membership Dues Easier for Chapters and Members Alike.

We all know that collecting dues at one point or another, with a brother or a sister, gets to be like pulling teeth. To overcome this obstacle, some treasurers might consider bribes to the point of offering gifts of appreciation to members who pay on time, but if the funds can’t be drawn from the treasury, this can also mean dipping into your own personal account or putting in even more effort, which is the opposite of what you want. Sure, you want to show members that their prompt payments are appreciated. Though you also don’t want to be walked all over. Talk with other officers about a reward system that makes sense, such as offering a parking space super close to the house, first dibs on gaming equipment like a billiards or foosball table, or other simple benefits of house living. And of course, you should give encouraging and reassuring words to those who pay on time and recognize them publically--either on a bulletin board or in another manner.

This, like the solution above, won’t make collecting membership dues easier in the sense of funds moving from a brother or sister’s account into the chapter treasury, but it will certainly oil the wheels of motivation. A chapter treasurer will want to make sure it is possible given the chapter’s budget, but it may make it easier to collect by offering a reduction in dues by a certain percentage in the following semester, provided the members pay their dues on time. Another incentive is to make sure members have access to the budget info so they can get excited about the things their dues are going toward, as well as to understand the complexity that arises when they don’t pay on time.

3. Use an Online Billing System

Okay, so this method is geared more towards the literal process of easing the process of collecting membership dues for your chapter. There are many online billing systems available to make the collection automatic, or at least ease the process for both the chapters and the members who are paying--because let’s be real, none of you has a lot of free time to spend depositing checks or with other banking hassles. Some online systems include OmegaFi’s Vault. You should check them out to see what works best for your chapter’s needs in assessing and collecting membership dues. If nothing else, the chapter might consider investing in a phone-mounted credit card machine, in order to pressure brothers and sisters into paying in person, during chapter meetings and when you catch them outside of class. If you see a delinquent brother or sister walking around with a slice of pizza from the food court, it’ll be difficult for them to pretend they don’t have their wallet handy.

This of course isn’t optimal or a first resort, but if members aren’t paying their dues, your chapter is already in a deficit in terms of funding. Thus, it makes sense that if the bulk sum is making it more difficult for members to pay their dues, the chapter should have a contingency plan to work with those members and offer dues to be broken into smaller, more manageable payments (such as into fourths) that add up to the complete membership dues total. That way, if a brother or sister doesn’t get paid enough from their food service or Uber job to pay all at once, they can still participate and contribute as much as is reasonable. One way to discourage this as a fallback for members in general is to not offer the same incentives, like discounts and privileges, to those on a payment plan.

This is probably a familiar word to members in any fraternity or sorority chapter. You can have brothers and sisters use fundraising ideas like selling branded merchandise or baked goods at school functions, host a walk-a-thon sponsored by local businesses to raise awareness for a good cause, such as sexual assault on college campuses, or even host community workshops on subjects ranging from resume building to self-defense (for those sisters or brothers savvy in such topics). Offering members options to pay their dues to the chapter via participation not only helps ease the dues collection process, it has a two-fold benefit of exposure of your organization and giving members humbling experiences in service of community. Depending on your chapter’s specific needs, you might consider utilizing Pennington & Company Capital Campaigns to assist with your fundraising efforts as well.

These are just a few ways to ease the collection of membership dues for both your chapter and members. If you can think of additional ways to keep the money flowing to the treasury, let us know in the comments below!