5 Struggles to Overcome Living in A Sorority House 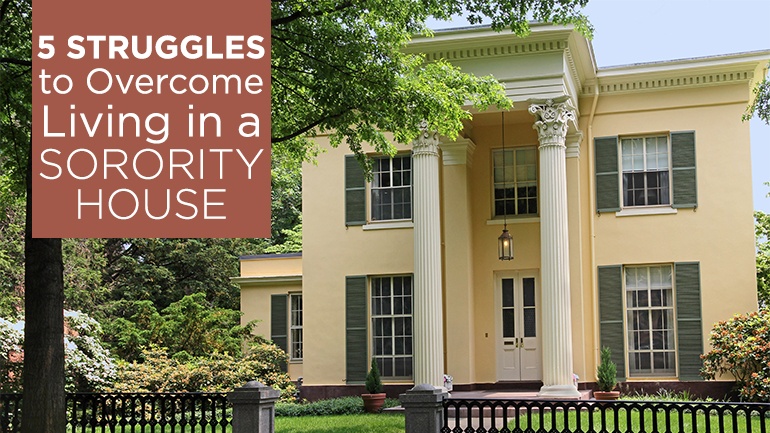 It’s day one and you’ve just moved into your new sorority house. You’re excited—of course—but the feeling is…mixed. It’s your freshman year and although Greek life offers this sudden rush of energy and excitement, the set-up of living with a sorority seems strangely off. It’s beautiful and elegant, sure. You’re surrounded by your beloved sisters, of course. You’re walking distance from campus and the local bars, bravo, but as you watch the laughter and perked shrieks of the girls around you as they transition into their new homes, you’re hit by an uneasy feeling: This is going to be intense.

There is a litany of benefits commonly associated with living in a sorority house. For starters, as we mentioned above, you get to live next door to your best friends. As old and decrepit as we are as recent grads, we here at OmegaFi can attest to the fact that real life “adulting” wishes it could be that sweet. Secondly, college is meant for socializing, and although you may have taken a great leap in joining a sorority, living within that bond of sisterhood is an even greater leap into that world. By the end of your first year, your social confidence will be increased exponentially, your awareness of the world broadened, and you will have made a concerted effort into building relationships that will last for life. However, all these pluses aren’t without their downsides.

And that brings us to that anxiety we mentioned earlier: the cons.

For your benefit, OmegaFi is here to delve into the 5 Struggles to Overcome Living in a Sorority House. It may not be possible to avoid them, but knowing what to expect might just knock the edge off.

5. The Rules Can Be Strict

For anyone who has lived with their parents during their teen years (about 99.9% of you reading this article), they understand the difficulty of living under someone else’s rules. Not only is this a slap in the face to your sense of independence, but it can also spark a recoil effect, causing you to act out (oh, those rebellious teen years!). So let’s fast-forward through those years: You’re 18, you moved away from your hometown and are now going to college abroad and living on your own for the first time. You can stay out as long as you want, there’s no curfew, and you’re suddenly responsible for feeding, clothing, and bathing yourself. It’s the first week of school, you just moved into your sorority house, and you’ve had the pleasure of meeting your house mom. She’s sweet, isn’t she? On the first week of freshmen classes there’s no homework, so it’s party time come Friday night. But…there’s one issue: rules. This means no alcohol, you’re responsible for doing your chores, and there are visitation hours (meaning no guys allowed after 10pm). Within your first week of independence, you’ve been reduced back to your previous pre-college status.

4. There Can Only Be One…Theme

We aren’t surprising anyone when we say that the interiors of sorority houses have a distinctive “look.” These colors and architectural choices might reflect the contemporary norms of other sorority houses, accenting the sororities’ colors in certain ways and generally providing a distinctly feminine aesthetic. “Good!” we imagine you saying. “I want to live in a beautiful house with my sisters.” That attitude is great to have, however, would you ever like to paint your room or decorate to your own tastes? Sorry, but that’s a no-go. In most sorority houses, that general aesthetic is law, meaning no, you can’t paint your room black if you’re going through a tough break up with your long-distance boyfriend. Those walls are beige and are going to stay beige whether you like them or not.

Let’s be serious, when you’re living in a giant sorority house with over 50 other girls, you’re not going to be afforded the luxury of personal space and alone time. For starters let’s talk about space, these homes often look like sprawling mansions (they’re certainly sizeable for the average nuclear family) but on the inside when you split that space into a space that accommodate 50+ girls, it can get a little tight to say the least. Speaking of tight, having a private room in a sorority house in most cases is non-existent, which means get ready to say hello to your roommate. This also means sharing closet space, bathrooms, common areas…you see where we’re going with this. In regards to alone time, in a housing space designed to accommodate groups, being able to find a space within the house that is free of anyone else will be exceedingly difficult. Although you can always leave to find this alone time elsewhere, the key is that you’ll have to leave. In this sense, your home, the space of refuge within your life, can often come with a crowd.

Excuse our French, but distractions suck. To start, they’re distracting. This means that term paper you were working on that needs to be finished by 11:59pm or else you’ll lose a letter grade (a letter grade that can mean the difference between an A in the class and a B+), just got a bit closer to that deadline after a 30 minute lapse in focus. Living in a sorority house is synonymous with a constant distraction. There will always be something going on within your house, whether it’s practice for a routine, a pomping party, or just generally having fun. This can be a great resource for uplifting spirits and bolstering social interaction when you’re bored and looking for something to do, but when you’ve got to put the pedal to the metal and focus, the never-ending stimulus of a raucous sorority house can be deeply disturbing. Again, although the answer to this problem is simple—go to the library—the recurring motif here is one of leaving one’s home to find a solution.

What is life without a little drama? Although this aspect of sorority life varies, it’s nonetheless relevant to the culture of living in a sorority house. Drama happens. It may be over something slight, like the cleanliness habits of your sisters (the one who keeps leaving hair in the drain), or maybe your sister borrowed your clothes and haven’t returned them. Whatever the issue is, living in a house full of your peers—particularly if you’re still getting to know them—can make domestic life increasingly difficult. Unfortunately, drama isn’t something that can be avoided like a distraction or a lack of privacy. It’s at home waiting for you until it gets resolved. Although stories of house drama are common, they’re often minor compared to the general sense of unconditional love that comes with living in a house full of your sisters. So when confronted by a good old fashioned conflict, take a deep breath, approach the accused and talk it out.

When you wake up and the drain has been magically unplugged, you’ll be glad you did.

If you’ve got a few other cons (or pros) to living in a sorority house, let us know in the comments below!