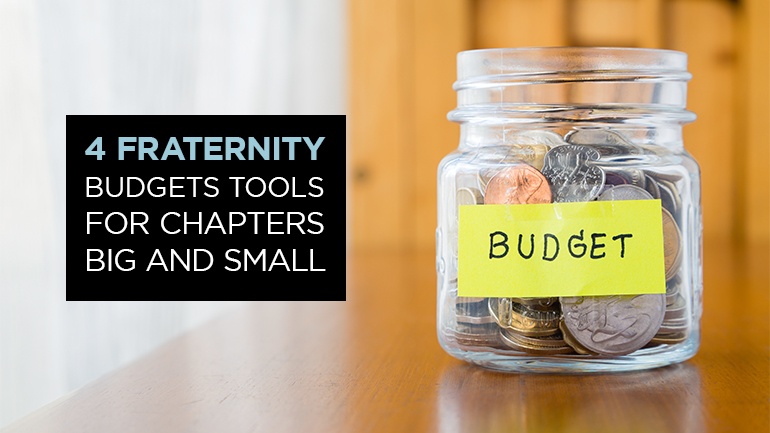 Money, money, money, money: the source of infinite headaches but impossible to live without. It’s a pursuit that can take years off your life and be used to extend it all the same. As a signifier of value and time, the concept of money has allowed civilization to progress as far as it has, and for better or worse, best practices say to get it, save it, and then get more of it. Rinse and repeat. Regardless of chapter size, the more money a fraternity generally has, the easier it is to operate. For brothers in an undergraduate chapter—particularly those within the chapter’s executive board—there is an inherent understanding that an increased budget can often mean more opportunities. For one brother an increased budget might mean more amenities for social events and parties (perhaps a bounce house). For another brother, an increased budget might mean the difference between a 4-star hotel for a chapter retreat or a motel 6. Although controlling one’s income is considerably more difficult (as an organization or as an employee in the workforce), one of the easiest things to manage when it comes to money is how you spend it. For this, you need a budget, and to manage it, you’ll need the best tools available.

With your benefit in mind, OmegaFi is here to give you 4 Fraternity Budget Tools for Chapters Big and Small to help you tamp down the excess spending and keep a little extra in the piggy bank.

Level Money is a digital app which gives you the options to set spending and savings goals for a given month. It allots how much you can spend each month, week, and day and will actively track how much you’ve spent. In the pre-internet age of budgeting, there was a system of saving money using envelopes. This system was as straightforward as it sounded. Using differing envelopes which represented various spending categories (groceries, phone bill, etc.), a person would put their spending limits for the month into the envelopes in order to avoid exceeding them. So for instance, if you have a monthly budget of five thousand dollars, you might put aside one thousand into an envelope for strictly rent. If your disposable income budget is three hundred for the month, once it’s gone, disposable income spending stops. Although a bit rudimentary, this can be an effective system in practice, lending tangible support to the spirit of self-discipline. In much the way the old system of envelopes worked for controlling spending, Level Money is a tool that actively reminds you where you want your money to go and how much you’re trying to save. For a fraternity looking to control its spending per semester, Level Money is a great tool for keeping event and social budgets under control while encouraging more detailed planning.

It’s difficult to make any list detailing the tracking of an active budget without mentioning good ol’ Microsoft Excel. Simple in nature—it’s a digital version of a spreadsheet—the app (yes, you can put it on your phone) offers the ability to input budgeting data manually, alter it when needed, and accurately track it. Although less automated then some of the other offerings on this list, the practice of inputting your personal saving and spending data is good for a fraternity’s chapter to get and keep more detailed records. As a blank white Excel sheet can appear a bit daunting for some, Microsoft has thankfully created several budget templates to aid in organization and data input. For a fraternity’s chapter, the use of a general excel spread sheet is particularly useful, as it can be shared throughout the chapter as a living document.

As an app created to help manage money, Mint is pretty popular, appearing often on best personal finance app lists. In short, the user will input their accounts (checkings, savings, etc.) as well as recurring bills into the app, and Mint will track your monthly spending. Although this is generally pretty standard fare for most budgeting apps, the detailed metrics that Mint collects are what make this app key. Breaking down spending into categories, Mint will show you just where your money has been going and how much. For instance, if you’ve been eating out a lot lately because you just haven’t felt like cooking, Mint will actively show you how and when you exceed your budget, allowing you to change your spending behavior to reflect the budget you envision for yourself. As it pertains to your fraternity’s chapter, the app can be tied to your chapter’s checking and savings accounts as well as any recurring expenses. This can be an invaluable asset to a chapter treasurer in allowing them to curtail in excessive spending and get a handle on a semester or yearly budget.

As the name suggests, You Need a Budget (YNAB) is an app designed for the user who “need[s] a budget.” Using familiar spreadsheets that are easy to use and understand, YNAB allows the creation of a monthly budget in minutes. In typical budgeting apps, the focus is on allocating money accurately (creating an emergency fund, for instance) but rarely on managing the money saved. In most of these apps, the money is often rolled over into the new budget. In the case of YNAB, the app actively encourages the user to live off the previous month’s budget. This switch in focus produces a greater yield for savings, as it encourages further frugality in spending. When channeled for use by a fraternity’s chapter, the app can fit into this mold perfectly, allowing the budget of each semester to be appropriately planned with an opportunity for added rollover.

If you started using all of these apps today, you'd be on your way to better budgeting for your chapter. However, if you're looking for a one-stop-shop for all things financial to help your chapter, you need OmegaFi's Vault. All of the benefits above plus an available team of financial experts that you can chat with when you're stuck–that's Vault.

Big or small, well-off or broke, saving and budgeting are the lifeblood of financial wisdom and literacy. Whenever possible reduce spending, invest wisely, and seek additional streams of income when necessary (fundraisers, donations, etc.). If you’ve got any fraternity budget tools that you swear by, whether for your organization or yourself, let us know in the comments below.