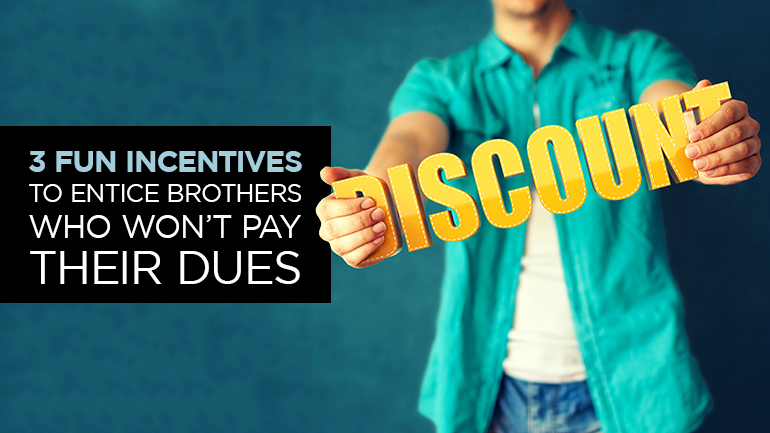 As we’ve mentioned before, getting brothers to pay their dues can be an incredibly difficult job. For starters, collecting money from a college student is hard enough. College is objectively expensive, and when you add up tuition, housing costs, meals and the random incidentals of life, there can be little left to hand to the chapter’s treasurer. Although a Greek Fraternity is one of the highest orders of socials clubs and organizational networks, it is nonetheless an extracurricular organization, one which ultimately takes a back seat to the real priorities of college life and education. Secondly, and perhaps most true: People don’t like giving up their money. Think back on every time you’ve made a purchase. Although, yes, you may have been putting that money to an immediate necessity (groceries, rent, a car payment, etc.), if you hypothetically had everything you ever needed plus a million dollars, would you ever spend money at all? In this sense, the first priority for brothers is to use their financial resources  to pay for immediate needs and responsibilities, and often that means chapter dues taking a backseat. However, although we’ve spoken on communicating the importance of dues, every now and then it takes inspiration to create action. Sometimes it takes a fun push into activity.

For your benefit, OmegaFi is here to give you 3 Fun Incentives to Entice Brothers Who Won’t Pay Their Dues to keep your treasury paid and your chapter excited.

3. Give a Discount for Paying Early

Often the easiest way to entice a sale is to give a discount. In fact, businesses small and large have been using this tactic since the dawn of modern economics. When looking to increase demand, discounting is a fine temporary measure to encourage this. With all things being equal, incentivizing a brother who won’t pay their dues requires a similar push for encouragement. Although most brothers will be reminded of an encroaching deadline, make the necessary arrangements and pay their dues on time, others who have had the luxury of late payments without penalties (outstanding brothers) may see the dues deadline as something that is ultimately permeable and shifting.

These attitudes on paying dues can be exacerbated still if a treasurer is a bit feckless and allows brothers to skate through weeks at a time without paying. In fairness, sometimes the cost of dues can simply be too high for some brothers, and in this case a little bit of creative psychology can be helpful. By offering a discount for brothers who pay their dues before the deadline (for instance $100 off of a $1,000 dues payment), this can serve as a balancing measure for all the brothers who pay late and are assessed a late fee. Further still, a wise method of implementation is to set your early discount rate as the standard rate itself: If the regular rate is $1,000 a semester, use that as the discount rate and charge $1,100 for paying on time.

2. Package a Chapter Shirt within the Dues Structure

If you want brothers to pay their dues on time (or early in the best cases), sometimes you have to entice them further than a monetary discount—they need something tangible, something they can feel in their hands. With that said, give them a shirt, and make it a good one. Although we’ve mentioned this before in the case of sorority fundraising, reach out to a brother who is studying graphic design or has an eye for cool shirts or slogans. With a cool idea for a shirt set, have tees (or tanks) printed up exclusively for the purpose of rewarding brothers who pay their dues when they’re supposed to. The key here is to make these shirts as desirable as possible. In short you want brothers to want to get one of these shirts. And the only way to get one will be to pay their dues. By making these shirts an exclusive and literal walking reminder to pay dues, it’ll be easier to entice brothers who have decided they’d rather not pay. Again, the key takeaway here is to give brothers something for their money, and for newly initiated brothers getting a new shirt to show off the fact their they’re newly Greek can be a powerful incentive.

So you’ve given a discount, added in a tangible bonus like a t-shirt, and brothers still aren’t paying: What do you do now? Although in most cases, we here at OmegaFi would advocate the stick over the carrot at this point, this is still a fun list, so we’ll keep it rated G. When brothers refuse to pay after discounts and gifts, it’s time to use the only other power that you have—the amenities of membership to incentivize your fellow brothers, in this case voting. For a moment, imagine that it is the week after your dues collection date and a sizeable amount of brothers have not yet paid. They don’t care about t-shirts, and the potential discount opportunity on their dues is long gone. Although these are brothers with outstanding debts to the chapter, they are still good brothers all the same that come to every chapter meeting dressed and ready to get down to business. The benefit to most fraternity bylaws is that they typically have a clause for inactive members (which outstanding brothers would be) that disallows them from being able to vote. This can be a strategic advantage to leveraging this standing over brothers who refuse or are choosing not to pay. In a sense, this means planning significant votes on the semester’s programming for the year the week after dues are collected. These votes could be anything, for instance the location of a formal, a vote that would have a resounding effect on all brothers. The benefit to this system is that although it works to disenfranchise brothers who haven’t paid their dues, it actively rewards the brothers that have, giving them a larger voice for being responsible and timely members.

Although it’s important to understand the mitigating circumstances why brothers may choose not to pay dues and allow formal extensions, in most cases non-paying brothers just need a little push in the right direction. You catch more flies with honey than with vinegar, so if you’ve got any suggestions on how you’ve been able to inspire brothers into paying their dues on time, let us know in the comments below!